Now after you have built your dipole you need to use something to feed it to your radio.
FEEDLINE or COAX or LADDERLINE

it is very import to select the correct coax for your antenna.
Performance and range.
All coax cables have loss
loss is based on 3 factors:the construction of the cable, the frequency of the signal, and the feedline length. RG58 good for only 50 feet and freq above 100MHZ and 20 feet for freq above 400 MHZ.

LMR-400, Belden 9913 or similar (I use rg213) if your run is longer than 100 feet or for
UFH antenna for 440, GMRS (general mobile radio service) like CB. Heavy center conductor and
additional layer of sheilding for minial loss.

Feedline loss is measured in decibels (Db) per 100 feet. The decibel scale is logarithmic, so a loss of 3 Db is a 50% reduction in power. A 6db loss is 50% on top of 50%, and so on. For example, if you have 6 db of feedline loss, your 50 watt signal coming out of the radio will be 12.5 watts as it enters the feedpoint of the antenna. The good news is that if the antenna has 6 db of gain (like the KB9VBR Slim Jim Antenna) the signal will be multiplied so that as it exits the antenna, it will be near 50 watts again. To calculate your total losses or gains, you subtract the feedline loss and add the gains from the antenna. The net result is your total gain or loss. 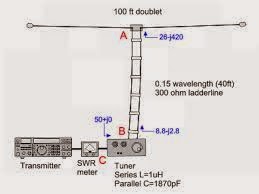 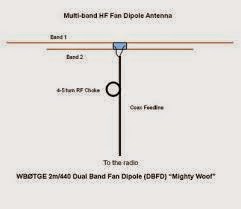 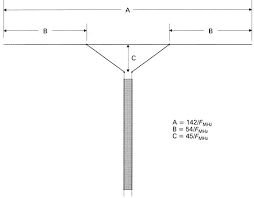 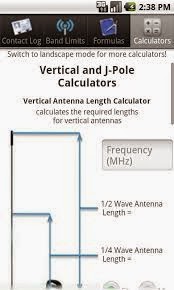 Goal: Understand basic of antenna's enough to build one WITH SAFETY.

Antenna someone without much knowledge could build and install: length in feet = 468/freq (mhz)

Dipole (simplest) resonant when electrical length is a half wavelength.

remember we are making a half wave dipole:

2. install insulators at each end and one between the two halfs at the center

3. the center insulator go to transmission line (coax) one wire connected to

The standing wave ratio is exactly what its name depicts. It's a ratio based on how

by your antenna back down the coax to your radio.

you would have no reflected energy going back down your coax. But many things such as a poorly

tuned antenna, or any antenna of the wrong length, a badly grounded antenna, faulty coax, or

any number of other things could cause a bad SWR reading.

So now you have the wire up at least 30 feet (best) check Standing Wave Ratio.

check on radio or you have an antenna tuner

this subject is beyond what I am trying to pass along, but will address more if necessary

at a later time

SWR of 0:0 is the ultimate and is what everyone shoots for

so you have your dipole up 30 feet (ground effect) you have checked the SWR and it is almost 0:0


BINGO you nailed it on your first try, if not take it down and cut or add to get swr to 1:1.

1. Cut your dipole wire some 2-3 % longer than the length given by the standard formula.

2. Make a note of the length obtained in step 1.

3. Raise the dipole to its operating height.

4. Measure the SWR at several frequencies within the intended frequency band.

(Use only a few watts and pick a quiet time on the band to make your tests).

5. Note the frequency (F = min) at which minimum SWR is obtained.

6. Multiply (F min from step 5) by the antenna length recorded in step 2.

7. Divide the result of the above multiplication by the desired frequency of operation, to obtain the final length.

Trim both ends of the dipole down to the final length obtained in step 7. ( So by using these 7 steps, you have only raised

Keep in mind that the antenna is only part of a coherent system! An antenna system is composed of...

The formula to calculate the (approximate) overall physical length of a dipole is:

The length of wire given by the formula is cut in half to make both sides of the dipole.

The above formula gives an approximate result because the length at the desired resonant frequency is affected by its operating environment conditions, such as...

the antenna height above ground,
the conductivity of the ground itself,
the proximity of metal structures and other objects

full wave calculation formula would be 936/f for a "full wavelength" dipole.


What is a COUNTERPOISE WIRE?
In electronics and radio communication a counterpoise is a network of suspended wires or cables (or a metal screen), used as a substitute for an earth (ground) connection in a radio antenna system.

What do Ground Radials Do?
In small spaces, vertical antennas are very attractive. They can generate low takeoff angles for radiation, which means long skip distances. ... Some like ground plane antennas have a built in ground plane radials, often drooping down to adjust the feedpoint impedance a bit.

What is a DIPOLE ANTENNA?
A dipole antenna is the simplest type of radio antenna, consisting of a conductive wire rod that is half the length of the maximum wavelength the antenna is to generate. This wire rod is split in the middle, and the two sections are separated by an insulator.

please enter email for a response: